As one of the most iconic Chardonnays from the entire Southern Hemisphere, Leeuwin has built a reputation for a style that perfectly reflects the new and old world.  With Burgundian complexity and keen acidity, marrying perfectly with new world weight and power, Leeuwin is no stranger to high scores…  Even their value-priced Prelude Chardonnay has already earned nearly a half dozen 92-95 point ratings, and at around half the price of the winery’s upper-end Artist Series, it’s an unbeatable value.

Created from 100% Estate fruit grown inside Australia’s famed Margaret River district, the 2015 Prelude was crafted under the guidance of two generations of winemakers. Spending just 9 months in French oak, the 2015 is wonderfully bright and lively across the palate, and beautiful expressions of ripe melon, honey dipped peach, Bosc pear and roasted hazelnut.  Leeuwin’s Prelude Chardonnay is made in a style that should appeal to just about anyone with a pulse… 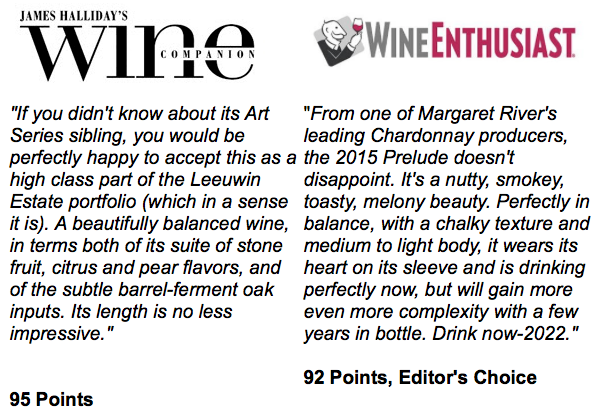